Rezek and Church of St. Barbara 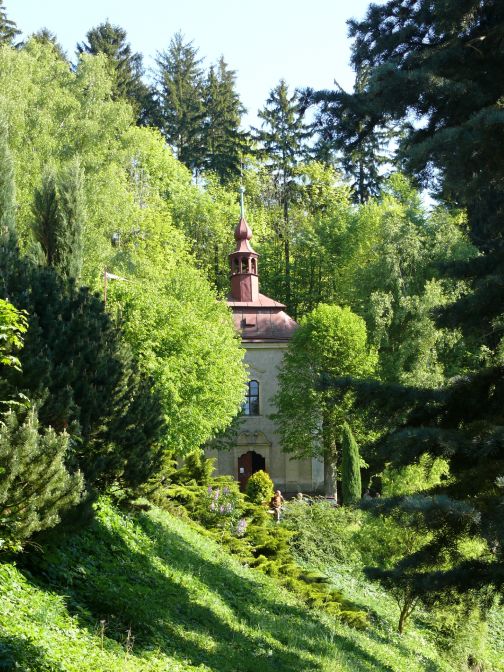 The spring in Rezek was for a long time known as well as information of its alleged healing effects. It was located above the municipal meadow in the area, where the forest starts, which since long ago has been called Rezek. The name Rezek is used for forests going as far as Blažkov and Libchyně.

A written record of the well dates to the year 1610. At that time someone hung painting of St. Barbara to a neighboring monumental tree. 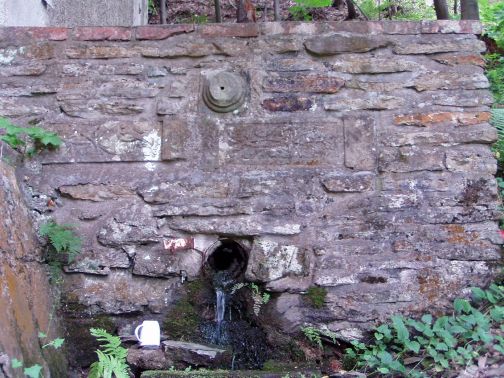 This place was a favorite spot of the prayerful wife of the local manor Marshal, Františka Göstlová, and both the spouses decided to build a chapel here and to dedicate it to St. Barbara. Works started on 17th of April 1736 and in the following year the chapel was terminated. It was consecrated by the bishop’s vicar J. J. Sax. St. Barbara is “the advocate of the happy hour of death” and besides the patron of miners. Since she was not fully “charged”, she was assigned another task in a modern period. Who was interested in obtaining a partner, he or she could try to encourage fate by burning a candle at the altar. Percentage of efficiency grew in the period of the Rezek Fair. Matěj Göstl expected from St. Barbara that she would put in a word for success of silver mining in our region. See the famous Merta’s Hole in the valley of the Bohdašín Brook.

Belief in big healing power of water spread all over the region. People visited the chapel in droves and collected and drank water. Building the altar and the whole chapel directly above the chapel was idea of Ms Göstl and no one could talk her out of it. Moisture systematically destroyed magnificent decoration of the chapel. If the chapel were located out of the spring, it could have stood here in its all original beauty. 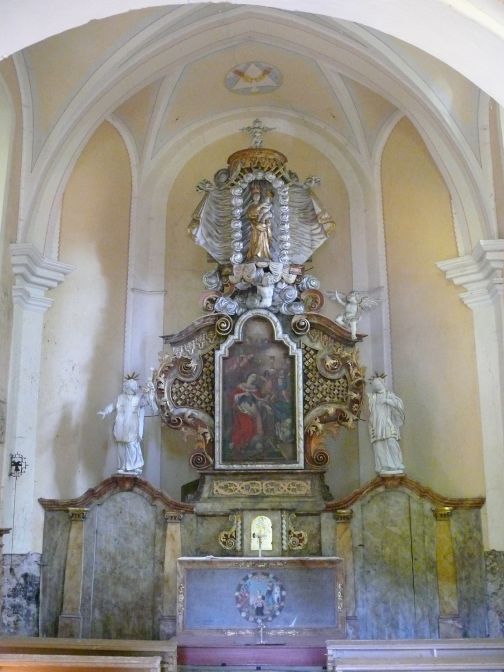 Popularity of the healing water woke initiated a business spirit in the town council and aldermen voted through construction of the municipal spa on 7 June 1735. Within 5 years there were three buildings next to the chapel: a spa house and a one-floor inn with four rooms for spa guests. Even foreigners started to arrive at Rezek. Big interest in healing stay forced the married couple of Göstls to build a hermitage in the interest of due maintaining of the chapel. Both of them founded donation for regular local services. 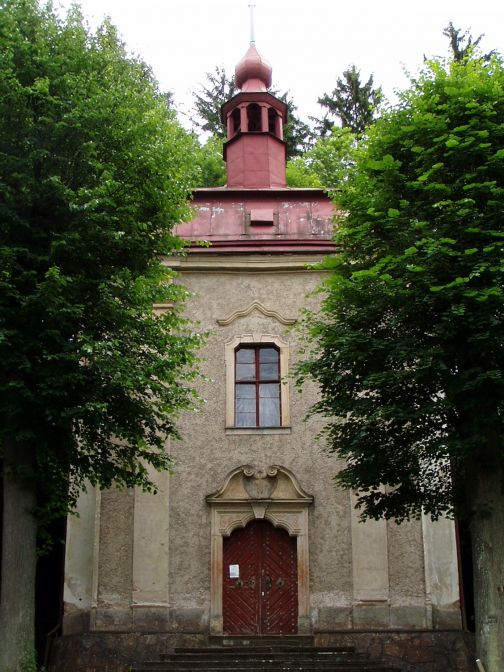 During the reign of the Emporor Josef II the chapel was endangered. Everything precious, which was used for decoration of the altar, was removed and sold and disposed of as well as crutches, which had been left here by the “healed”. Later on, due to donation, the Rezek chapel was excluded from the Josef II patent, however when in 1811 there was a state bankruptcy, donation dwindled to a minimum value. Pray for souls of dead then became a part of the mass in the decanal temple.

With exception of the chapel all the original constructions were made of wood. Water was conducted to the spa via the pipeline from the spring above the altar. From this it can be seen that the spring is quite productive. The eremite lived in the area permanently, since he as the verger took care for the chapel and besides he also collected fees from the spa. One of the last eremites was Václav David, known as a very skillful weaver.

Rezek, together with the forest, was bought from the insolvent municipality by the count Anthon Leslie on 27 May 1792. The new owner decided to renovate the shabby spas. In 1793 he had the old building demolished and erected a new one, a one-floor walled object with rooms for guests.

In 1801 there was built a new spa building and the road leading to it was adapted. The bank officer František Knapp had erected, next to the road to Rezek, in its highest point above the oak, the sculpture Ecce Homo – the sculpture of whipped Christ in 1801. This place was called At the Lord Jesus. The sculpture was there for 80 years. When in 1880 a little better road to Rezek was constructed, the sculpture was relocated to the vicinity of the chapel, to the area, where a path deviates from the road to Bradle. Several decades passed and in the evening, after the Rezek Fair on May 2, 1918 some vandals pulled it down and broke. The broken sculpture was transported to the chateau and after repair located in Rezek again in 1928. 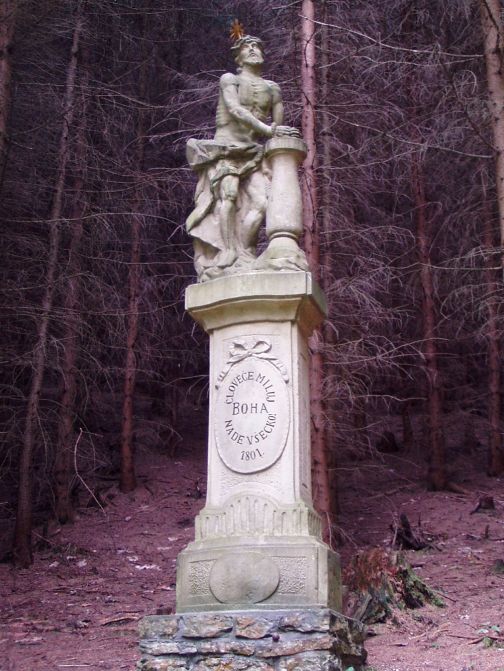 In 1813 and 1814 Rezek was used as a hospital for wounded Russians from the Battle of Leipzig. In 1886 the building was again thoroughly rebuilt and a big hall was added.

Since the chapel still had to be reconstructed, in 1835 a radical measure was made. The spring was penetrated next to the chapel and the hole below the altar was bricked-in. However vicinity of the spring is still harmful for the chapel.

The next one taking care for the spa was Josef Bartoň – Dobenín. In 1922 the building was elevated by one floor, a new roof was constructed, facade reconstructed and a new aerial porch was built.

The most famous era for Rezek was in the second half of 19th century and then also several years before the World War I. Dr. Sladkovský, a politician forgot by history, looked for quiet here after his imprisonment. Neruda composed his Cosmic Songs here, as Ms. Renata, Tyrš’s wife revealed. Miroslav Tyrš arrived to this place for gymnastic activities. In 1877 all three of them met here.

The commemorative plaque of Dr. Miroslav Tyrš and Jan Neruda was unveiled on the building of restaurant in Rezek on 28 October 1934.

In period of its glory Rezek had 300 to 400 guests staying here within a year. 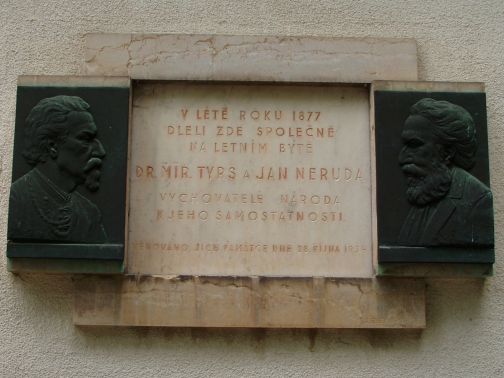 The former climatic spa and Church of St. Barbara with its healing spring.
display on map