It can be found in the western edge of the municipal historical reservation, which is located on the arenaceous promontory, surrounded from three parts by the Metuje River.

Together with the chateau it represents a pearl situated in the foothills of the Orlické Mountains. It is located next to so called Land Gate – border cross point to the neighboring Poland, through which there was a commercial path even in ancient periods.

After Černčický the manor of Nové Město was owned by the Pernštejns , who, amongst others, had merit in the castle reconstruction. The important builders in the history of the mansion were in 2nd half of the 16th century by the Stubenbergs. Their Renaissance finish of the castle to the chateau can be seen in details even today.

When the Thirty Years‘ War finished, there was performed important, this time early-Gothic reconstruction in years 1651 to 1660. The builders were the Scottish Leslies, who invited also Italian artists. As the main builders there were appointed Carlo Lurago, Domenico Rossi and Fortunato Duretti. In the year 1802 the family tree of Counts Leslies was terminated by death of the last male descendant and the owners did not dwell in the chateau permanently any more. The owners of the families Dietrichstein-Proskau-Leslie, Attems and Lamberg visited it only occasionally.

In June 1812 Russian Tzar Alexander I. stopped here on his way to the anti-Napoleon negotiations with the Prussian King and Austrian Chancellor.

Deterioration of the chateau was stopped even in the year 1908, when it was bought by textile manufacturers from the close Náchod, brothers Josef Bohumil and Cyril Adolf Bartoňs with intention to transform it into a dignified and representative residence for their families. Dušan Jurkovič, a renowned architect, was charged with the overall reconstruction and adaptation of the chateau. Construction works were terminated in 1911, Art-Nouveau modification of some interiors continued until 1913. In 1912 the Bartoň family was nobilitated with the predicate of Dobenín. Brothers left the intention to live in the object together in 1910, when Cyril Bartoň purchased a chateau and a country estate Zbraslav at Prague, where he moved with his family. The architect Jurkovič not only adapted both interiors and exteriors in spirit of the period and according to his ideas on transformation of deteriorating historical building to a representative residence, but he also equipped it with technology and modernized. The entire chateau was provided with electricity, central warm-water heating, phone, there were established bathrooms, modern kitchens and also a personal and dining elevator.

The old manor waterworks, standing on the embankment of the river under the south-western wing of the chateau and since 1688 for 219 years supplying the chateau, the brewery and the town with water, he changed into hydraulic power plant, the source of electricity. This power plant, with technological equipment provided by the companies Štorek (the adjustable-blade-type-turbine) and Bartelmus-Donát of Brno (alternating current generator), which was modernized in the 30’s of the 20th century and which is functional and produces power so far.

In the period of the First Republic (between the world wars) Jurkovič’s adaptations of interiors were developed by Pavel Janák, in cooperation with artists Helena Johnová, Marie Teinitzerová and František Kysela, now in the style art deco. The last Janák’s adaptations, in the style of Functionalism, are of years 1940 to 1941. Both the architects work with the first class materials and top artists and suppliers of their period. Nowadays the chateau is again, after more than a 40-year interruption, in property of the family Bartoň – Dobenín, which obtained it back from the state, together with some other property, in 1992. The chateau is available for public (under certain conditions all year long), specifically in the full extent as under the national administration. It is possible to see original Jurkovič’s and Janák’s interiors, collection of M. Teinitzerová’s textiles as well as of H. Johnová’s ceramics. In the collection of other artistic works there are represented the following artists: F. Bílek, P. J. Brandl, J. Čermák, A. Hudeček, B. Jaroněk, J. Kupecký, J. Mánes, J. Mařák, J. V. Myslbek, V. Nechleba, V. Sedláček, K. Škréta, O. Španiel, J. Štursa, M. Švabinský, J. Úprka and others.

Also the chateau garden went through a wide adaptation and revitalization under the guidance of the architect Jurkovič in the years before the 1st world war. Except for architectonical adaptations he also projected here a warmed greenhouse and water systems, fed from the Metuje River and designated for irrigation, supplying of the fountain and other water elements. The upper part, in next vicinity of the chateau building, was divided by terraces with flowerbeds and wooden fences. The wooden covered bridge, which is made in the spirit of Valachian folklore constructions, used by Jurkovič as inspiration at its development in 1911, allows you to get to the lower part of the garden. It is divided into three parts. The right one, with the greenhouse, has the sivicultural (supplying) function with the task to supply with flowers, vegetables and other crops. The left part was adapted as the orchard, where the tennis court and the pool were located. The middle parterre with bosquets, broderies and the baroque fountain fulfills decorative function. Its part is “theatron” with stony figures of the “Dwarf Cabinet”. Together with other sculptures, which are located in front of the main entrance of the chateau, they were created in the workshop of the baroque sculptor in the 1st third of the 18th century. Their original destination was precincts of the baroque magnate, the count F. A. Sporck in Kuks. For decoration and enrichment of the chateau complex in Nové Město were also selected by the architect Jurkovič. The chateau garden Nové Město is a reminiscence of Italian baroque gardens, however with clean elements of the Art-Nouveau stereotype of the period of its origin, mainly in original intentions of the architect Jurkovič in geometry of beds and their planting. It is also the last established formal chateau garden of its kind in our territory before the end of the 20th century.

The great example value for contemporary adaptations of historical buildings as well as for development of monument preservation have performed interiors of architects Jurkovič and Janák due to the fact, that at application of their contemporary artistic invention they maximally respected artistic and monumental value of older decoration, which can be in possible extent, based on their level of preservation and at will of the owner, they left to be seen by other generations.

The northern main chateau tower called the Churn, 30 fathoms (53 m) high, has a roofed parapet walk in the height of 25 m, from which wide surroundings can be seen, as well as skyline of the Krkonoše Mountains and the Orlické Mountains. The internal adaptation of the tower in form of shell niches, richly modeled stucco medallions with portraits of Roman rulers and alliance heraldries above doors are from the 2nd half of the 17th century. The staircase of the red xylolite was adapted in the year 1909, as well as the window sill of the roofed parapet walk and the tower clock with two dials with 1.5 m in average and two cymbals with 66 and 45 kg, which remind us with its “voice” regularly that time runs. The second tower, growing originally above the eastern corner up to the height of the mentioned parapet walk, crashed down at conquest of the chateau in March 1628 after explosion of gunpowder stored inside it. The rumor was that 150 persons in its vicinity died. Not all of them were found.

Italian master builders and stuccoworkers, participating in the early Baroque reconstruction of the chateau in the 2nd half of the 17th century, as well as F. V. Harovník with his paintings al fresco, participated in this region also on building adaptations and decorations of other mansions. The example may be chateau in the nearby Náchod, where they worked for the same reason for Ottavio Piccolomini de Aragon, Duke of Amalfi, co-belligerent of Walter, Count Leslie, in the imperial army, initiator and co-actor of the execution in Cheb in 1634.

Rooms on the 2nd floor of the north-eastern wing were used in the course of 19th century, when the chateau was not permanently dwelled by its owners, as so called Noble Apartment. These rooms, with the contemporary equipment, were preserved for occasional visits of owners and their guests. It can be therefore expected, that this is place where the Russian Tzar Alexander I was regaled at his first visit of the chateau in the year 1812. Other rooms of the chateau were in this period used for administrative and economic purposes and leased to governmental and church institutions as flats and offices. On halls on 2nd floor of the north-western wing there were in the course of the 19th century held club balls, exhibitions and annual meetings. 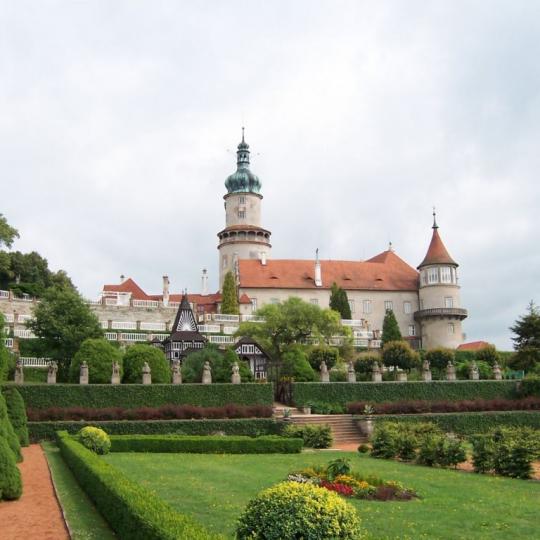 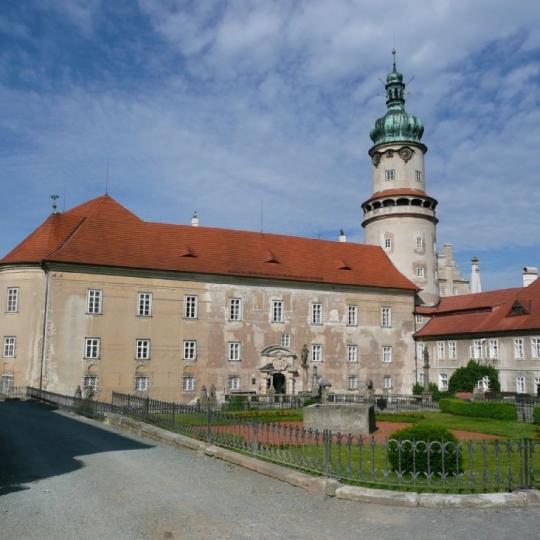 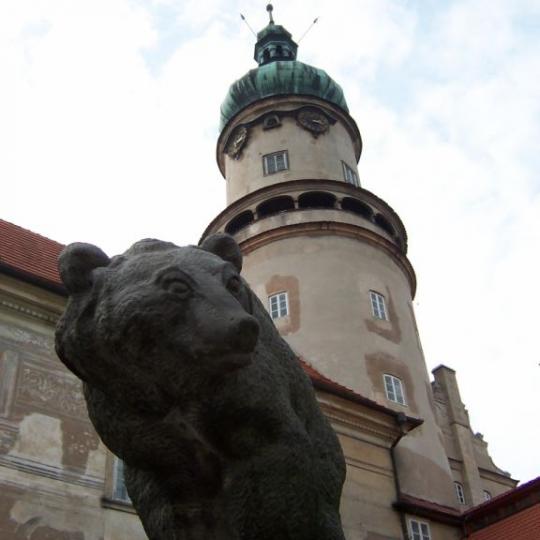 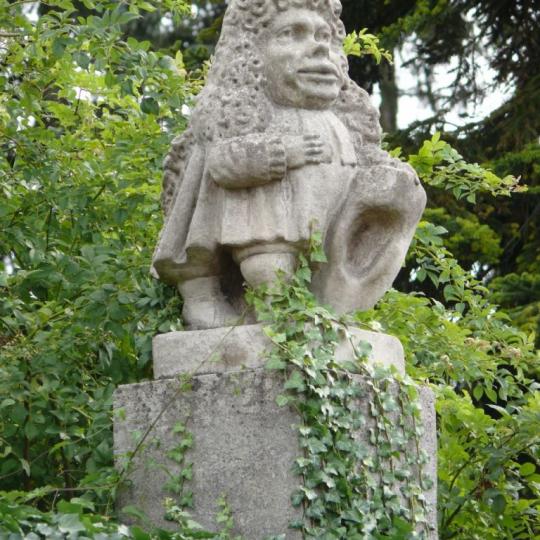