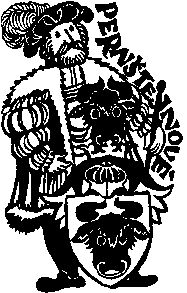 Vojtěch of Pernštejn considered well how the renewed town should look. In the year 1528 he started to purchase some of incendiary ruins, mainly in front of the mansion. No houses were renewed in these places yet, since the owner wanted that wider space highlights the silhouette of the chateau. The new northern front had not more ten, but seven houses.

Basic construction of the town lasted five years. The lord’s builder erected before fronts of lots, with exception of already not built houses No.1244 and 1245, four continuous, uniformly solved front walls. In the overall construction there were built four walls and there were arcades added to them.

Above the attic there was erected continuous row of connected gables, which consisted of middle, semicircularly concluded higher parts. These had at sides two lower parts, concluded by the quarter circle, so called swallow tails. This is how the town obtained appearance of north-Italian, Venetian Renaissance.

As by some spell divine all the construction chaos disappeared and the place became the palace courtyard for the chateau, in which the Pernštejns rebuilt the castle of Černčický. Both the dominants of the town, the church and the chateau, were stressed even more. 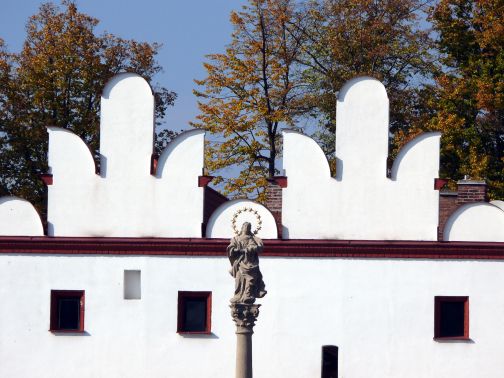 The spectacular front was already erected and the building activity still continued behind it. The bourgeois connected their houses to the front wall. They had to pay for this part of the house to the Pernštejns for fifteen years.

Italian builders tried to connect Renaissance with late Gothic and, which was positive, they were open to local traditions. Arcades are Renaissance also due to their proportions, low cylindrical pillars enlarge downwards, where they are even strengthened with trunks. Arch spans are considerable. This is why arcades obtained luminosity and availability.

Fight of Gothic with Renaissance can be also seen on the house portals. Vaulting is exceptional. Profiling of terracotta window linings attracts deserved attention. You can find similar one also in Pardubice. This unification and typification shows, that it was built based on prefabricates.

At two houses there are inscriptions in linings of entrances. In No. 1221 in the east side you can find the year 1531. The entire inscription is: “1531 Jakub, income” (the next word is illegible) “of Bohdaneč, Markyta of Česká Třebová” and oak leaves in the heraldry. The illegible word is probably erroneously interpreted as a “scribe”. In the southern front at No. 1231 you can find the inscription “Sir Waczlaw 1534”. These are dates of termination of the house renovation.

Nowadays the most beautiful is the northern side of the square, where facades and gables were put returned in the original condition. Their unification is partially disturbed by the house No. 1209, the town hall with the tower, since it was built as the two-storey building. On the western side four houses were not renovated and therefore nowadays the last house has No. 1245, the hotel Brouček. There was not money for the parsonage and the school. The suzerains strengthened defense of the chateau and of the town by the gun bastion in 1532.

The elementary ground plan was kept at renovation of the town. Between ramparts and farm buildings there was established, together with courtyards, also wider space, which as the backhouse space makes circle round the whole square.

After the Pernštejns’ construction there were altogether 39 houses in the square. This construction was however so magnificent that the town did not change considerably in after it in the ramparts.