The Saint Trinity Church has not an evidence number and it starts the block of houses on the southern side. It is firmly connected with the house No. 1227. 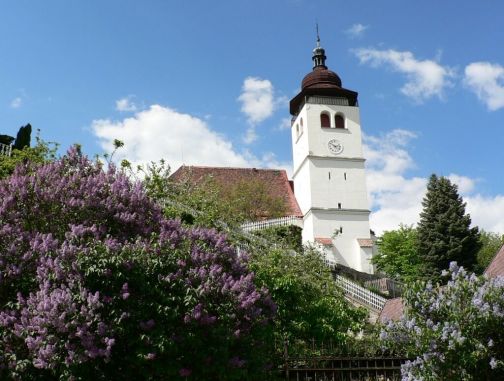 Jan Černčický took in account neither the church nor the parsonage at foundation of the town, since both of them were in Krčín. In places, where nowadays the church is located, there was a wooden dwelling house, similar to other houses.

For citizens the Krčín church was quite far, which was the reason, why in the year 1513 the municipal council bought the named house and after having pulled down its wooden parts it started to build the church. In the year 1519 the construction was finished. Speed of the construction was possible due to numerous legacies. In the year 1522 regular alternations of religious services in Krčín and in Nové Město were agreed. Since 1523 the church was used fully for its purpose. The new church had almost square ground plan, it was walled and it had a free truss without a ceiling. The tower did not stand yet, and where now it is situated there was originally a sacristy. Immovable estates were continually added to the church, as the first it was a garden in Bořetín and a meadow in Provaznice.

The fire in the year 1526 affected also the church. Everything made of wood burnt down, especially the truss and the cover, however walls remained. This was advantage of the church compared with the bourgeois houses. No other bigger elements for masons appeared. Wooden parts were quickly replaced and even in the year 1527 the church served against its purpose. It was covered with a shingle roof and decorated with a small tower. In 1528 it was completed and windows were glazed. Its reconstruction was covered by gifts even from more distant places.

In 1528 the church was prolonged and the gallery, or so called choir-loft, was added. In 1530 construction of the tower started. It was added to the southern part of the church, to the presbytery. It is a stately high cylindrical construction, almost of the square ground plan. Completion of the church and of the tower dates to the year 1541, while one year before the church was, based on instructions of Jan of Pernštejn, thoroughly rebuilt. Its appearance of that year has remained till today.

The tower has a gallery, a helmet and it is strengthened by connection with the wall. Originally there was a house of the bellman. The municipal clock with the bell “rouser” was located in the church tower. Since the clock needed repair each year, Jan of Kácov donated to the municipality a meadow, which was called the Horologist’s Meadow. The clock stroke also quarters of an hour. In 1584 the original tower truss was demolished and a new one was built. Under the truss there was built a warning post with four windows, which was a timbered gallery with handrail all over the four parts. Nowadays there are hung three bells of year 1542, 1949 and 1994 in the tower.

The church was covered with the cross vault and it is decorated with Gothic windows. Jan of Pernštejn donated to church a tin font in 1543. There is the emblem of the Pernštejns with the aurochs on it. The Dean Pelhřim Novák however sold it in the 2nd half of the 19th century; nowadays the font is in the depository of the National Museum.

In 1556 the church went through other construction changes. From the outside there was added a covered staircase to the choir and inside the church was prolonged under the first floor of the neighboring house.

The church stopped to be the filial church in 1567, when the parsonage was officially moved from Krčín to Nové Město. At this occasion other adaptations of the church were performed. 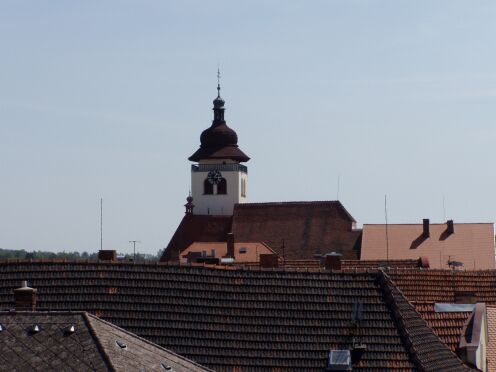 After the fire in 1639 there was erected a new truss. In 1677 the church obtained a new alter (the Holy Trinity) and a new organ. In 1777 new ceiling fresco paintings were built.

In 1805 a big part of the church roof crashed down, however no one was injured. Based on financial assistance of Karl of Dietrichstein the roof was reconstructed and covered with tiles.

In the period of the Prince Franz Josef of Dietrichstein there the shabby roof above the presbytery had to be removed in 1817. Also this roof went through general reconstruction and covered with tiles. From this period also the small tower comes. In 1821-2 the crypt was cancelled and the level of the floor was raised based on sand coverage and paving. The outer coat was modified into nowadays’ appearance in the year 1896.

The church bay is rectangular, adjoined by the polygonal presbytery. The roof is of two types: over the presbytery it is hipped and transversal roof areas have triangular shape. The big cathedral area has the saddle roof. The west side of the church originally ended with a Renaissance gable with well-known swallow tails. These were taken down in 1875. Nowadays the back front protrudes only slightly above the roof of the deanship.

Internal part of the church bay is covered with the cross vault with disappearing crowns.

Thanks to construction of the church the town was given the second very important dominant. Its skyline grows high above the town, representing a dignified partner to the chateau.

Internal equipment of the church comes usually of 17th century. The organ is of the year 1656, made by Jiří Weindt of Křešov. In the beginning it created a uniform scene, however in 1851 it was divided into two parts. In the front of the choir-loft there hangs an old Marian painting of 1726. It is important due to the fact that there is drawn a silhouette of our town at its bottom edge, and the house gables have still the Pernštejn shapes. This also proves, together with the building investigation, that this construction element was used in our country in the Pernštejn period. The painting in the main altar comes from the year 1691 and represents the Holy Trinity. It was painted in Graz and donated to the church by James, Count of Leslie. In the year 1745 the walls were decorated with the Calvary paintings. Nowadays’ Calvary is of the year 1905. It was made by a Černčice native, the academic painter Josef Ladislav Šichan. The main altar is a magnificent Baroque work. In 1851 it was made by Jan Král, a decorator of No. 1050. In the first floor galleries there are both Baroque paintings, originally situated on the ground floor, and then Václav Hellich’s paintings from the middle of the 19th century, which were ordered by Jan Karel Rojek. 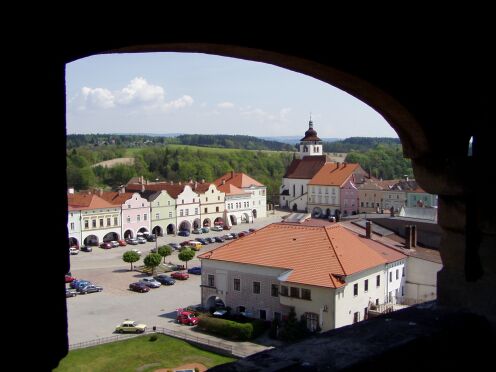 In the niche of the church wall, on the left side from the entrance there is a sculpture of St. James. This sandstone sculpture originally decorated the front of the Church of St. Salvador, where it was located in the niche above the portal in direction towards the Regional Gate. When the church was pulled down in 1877, the merchant František Smola had the sculpture built at his expenses next to the deanship on the octagonal fountain, which it had had erected here before also at his expenses. This small fountain was made of one sandstone rock as the previous, four-square. When in 1896 the water mains were built, the fountain together with the sculpture was moved to the Decanal Garden. Some time later the sculpture was moved to the arbor of the Decanal Garden. At reconstruction of the church in 1922 it was repaired and placed on the pedestal in the church wall niche. The place is framed with the iron bar.

In 1886 the Church was painted by the painter Haněk of Nový Hrádek.

The church went through bigger reconstruction in period of the Dean Novotný, in 1922. That time it was very shabby and reconstruction was possible only thanks to Josef Bartoň – Dobenín. It was necessary to stiffen trusses and the roof had to be covered with tiles. There was also installed a ledge, which in previous years had been replaced by planks. The church was newly painted. In the year 1973 the church was given a new facade. That time was confirmed that the church was built of the same material as the bourgeois houses. The last but one repair of the church is of 2000. During the last extensive repair, at the administrator Linhart, in the anniversary year of the town, 2001, the floor was lowered to the original level. In addition 5 rare tombstones were found (the oldest of Lord Jan Stang of Boberstein and of Stonsdorf of the year 1555), remnants of the grave places, ceramic shatters of the 14th to 16th centuries (can be expected due to further related findings in the location, the period of the Lausitz Culture). Consequently there was restored the classical organ in its last stage of adaptation made by Hanisch.

The Saint Trinity Church has not an evidence number and it starts the block of houses on the southern side. It is firmly connected with the house No. 1227.
display on map